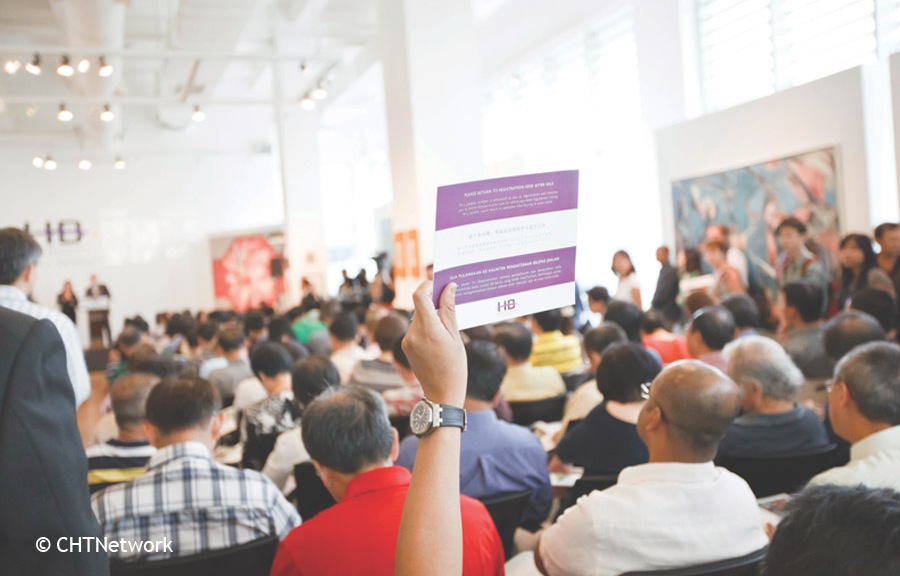 The Asian art market is currently one of the fastest growing business markets in the world, with China, Indonesia and India leading the charge followed by emerging countries such as Vietnam, Philippines, Singapore and even Myanmar. Auction houses are consistently hammering art pieces into record prices, making it hard to believe that some still consider art as nothing but a beautiful object that one should only acquire when spare cash is available. This primitive perception has long been overturned in the West where art is not only considered an important part of a growing civilisation, but is also a lucrative and exciting investment. Art in the West do not only to adorn walls, but are also regarded as assets that are kept in the accounting books.

Malaysian contemporary art scene has been relatively slow in entering the international arena. There are artists who have been struggling throughout the years on their own, trying to make a name in the West without the backing of their motherland and it is an uphill task.

The establishment of the National Art Gallery (now known as National Visual Arts Gallery or NVAG) in 1958 by Malaysia’s first Prime Minister, Tunku Abdul Rahman, was the most important milestone in the Malaysian art history. However, as it happens in almost every other developing country, art came to be considered the ‘adopted child’ in terms of priorities. Fortunately there have been some collectors and institutions collecting Malaysian art since its early days. Bank Negara Malaysia (Central Bank of Malaysia) was one of the early institutions that, through the leadership of its second governor, Tun Ismail Ali, started collecting and supporting Malaysian art since 1962. It was indeed an important step towards recognizing art talents and helping the art industry but the influence then was very much limited.

Many art groups and art societies were formed in the name of art between the 1940s and the 1960s, but most did not survive as art was a tough profession then to be associated with. Remarkably, the oldest registered art society in Malaysia, the Penang Art Society, has not only survived, it has thrived and celebrated its 60th anniversary in 2013 and boasts a national membership of more than 400.

Furthermore, the support from senior art promoters is invaluable. One of them, Dato’ Dr Tan Chee Khuan, is probably one of the heavyweights in promoting Malaysian pioneer artists since the early 1980s. He has published more than thirty books about Malaysian art and has also donated millions worth of art works to both the national and state art galleries. A person of such vision and patriotism is a rare breed.

Other art related figures are Ooi Kok Chuen and Dr Zakaria Ali, both art writers that have been consistently contributing to local art happenings and its progress through their pens for the past twenty odd years. The setting up of Petronas Gallery in 1993 provided extra avenues in the art market, and together with NVAG, both organisations have consistently collected, exhibited and supported Malaysian contemporary art. Another important Malaysian art movement was the art residency projects by both public institutions and private organisations that provided a platform for artists to excel.

In 2008, art entrepreneur and collector Datuk Vincent Sim pulled his resources together and created another milestone in the Malaysian art industry by conceiving Malaysia’s very own international art exposition – Art Expo Malaysia. It was a move that initially many had thought off as another white elephant, but Datuk Sim and son Sim Pojinn have proved the critics wrong as the show has gone from strength to strength through years of hard work.

Another instrumental development in the Malaysian art front was the Malaysian government’s helping hand in making this art expo even more successful. The 1MCAT (1Malaysia Contemporary Art Tourism) programme that was initiated in 2010 was the brainchild of the Ministry of Tourism (now known as Ministry of Tourism and Culture) with the intention to promote contemporary Malaysian art as a tourism product catering to the tourists visiting the country.

The Ministry of International Trade and Industry, through its external promotion arm, MATRADE, also joined in providing certain tax claimable incentive for local exhibitors, making it more attractive to join in and promote Malaysian art in local and international expositions. Furthermore, it has provided special rates on the space rentals in MATRADE Exhibition & Convention Centre where the Art Expo Malaysia has been holding its expositions for the last few years.

In 2009, prominent Malaysian real estate consultancy, Henry Butcher (HB), teamed up with Vincent Sim and started the HB Art Auction. The arrival of the first proper art auction house in Malaysia was a major boost to the art industry, eliminating the taboo of Malaysian contemporary art having an almost non-existence secondary market. KL Lifestyle Art Space (KLAS) Art Auction was the second one to join the party in 2012, followed by the Indonesian-owned Masterpiece Auction and the Edge Auction in 2013, making an unprecedented yet impressive record of four auction houses conducting more than 10 auctions annually!

With positive anticipation from local art patrons and collectors, the domestic market for Malaysian contemporary art is heading for a bull run. For example, top framer Pinkguy’s gallery reported sold out exhibitions in 2013 of two artists – Suzlee Ibrahim and Ch’ng Huck Theng – less than half an hour after the exhibitions’ openings.

On the other hand, important commercial art galleries, such as Valentine Willie Fine Arts, Wei Ling Gallery, Galeri Chandan and Richard Koh Fine Art, are among the Malaysian galleries that frequent regional art exhibitions, including Hong Kong and Singapore, to further promote their resident artists. The consistency of these galleries’ participations is highly dependent on the commercial return or simply how profitable, but it nonetheless is an applaudable move.

Back in 2009, the NVAG, then led by Director General Datuk Dr Mohamed Najib and its Board, decided to seek MATRADE’s expertise to assist in promoting Malaysian contemporary art overseas. It was not an easy task as art was never considered a product of trade by the ministry. The move was necessary and important as NVAG was of the opinion that there was no proper department in the government sector designated to promote Malaysian art professionally and efficiently in the international stage.

The first meeting was held in MATRADE with Zanita Anuar and Ch’ng Huck Theng representing NVAG and Mustafa Aziz representing MATRADE Centre. As Malaysian contemporary art was at its very early stages in international recognition and without the backing of the government, it was obviously a very difficult journey to pursue. It was akin to a new Malaysian brand or product with a lot of potential trying to penetrate the international market with limited funds and experience.