8 June 2014 witnessed the glitz and glamour of Broadway as its biggest stars converge to celebrate drama, flair, pizzazz and flamboyance of American theatre. Four-time Tony Awards host, Hugh Jackman ditched his Wolverine-claws and rugged leather jacket for a crisp and elegant suit and sartorial beard that oozed masculine charm. What’s more, he wowed the star-studded audience with his singing and energetic dancing, much to the delight of his legions of fans.

Fresh off his 10-year stint as the suave Barney Stinson on the wildly popular television sitcom, How I Met Your Mother, Neil Patrick Harris scandalised and seduced with his electrifying performance in Hedwig and the Angry Inch. Even his performance at the Awards ceremony drew much chatter for the fabulous Hedwig @ Harris-in-drag licked Samuel L. Jackson’s glasses, gave Sting a lap dance and made out with his (Harris’s) husband who was seated in the front row. 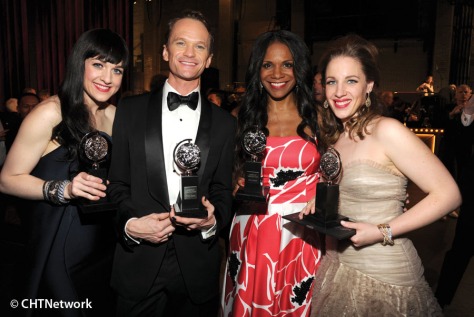 908 : Number of total costumes made this year by the eight Tony nominated costume designers from Bullets Over Broadway, A Gentleman’s Guide to Love & Murder, Hedwig and the Angry Inch, Act One, Casa Valentina, After Midnight, Machinal and Twelfth Night

337 : Number of costumes in each performance of Aladdin

67 : Number of votes Lyndon B. Johnson, played by Tony Nominee Bryan Cranston, gets to pass his proposed bill in All the Way

16 : Carole King’s age when she wrote her first song, as told in Beautiful – The Carole King Musical

5 :  Number of Tony Awards Nominee Audra McDonald has won in her career

4 :  The height (in inches) of Tony Nominee Neil Patrick Harris’ highest pair of heels worn in Hedwig and the Angry Inch

1 :  Number of inches Hedwig is angry about